In early June, President Biden, under an executive order,  essentially blacklisted Chinese firms by prohibiting US investments in certain Chinese firms that “undermine the security or democratic values of the United States and our allies”. The port city developers China Harbour Engineering Company (CHEC) and the mother company China Communications Construction Company (CCCC) were on this list. On its China policy, the United States (US) stands firm with its bipartisan consensus. This would raise concerns in nations like Sri Lanka, which has a large Chinese infrastructure portfolio constantly growing in the country.

Regional powers and their periphery

Such Chinese firms are barely exclusive to Sri Lanka. In fact, they operate in the US’s own backyard along the 82-kilometer Panama Canal. The Panama Canal was built for the strategic expansion of the US, connecting the Atlantic–Pacific Ocean route, and is today surrounded by Chinese infrastructure projects. Chinese firms such as CHEC and CCCC are also involved in infrastructure development in Panama. In 2017, Panama ended its diplomatic relationship with Taiwan and embraced Chinese BRI assistance amounting to billions of dollars toward infrastructure. China is involved in a bridge project over the Canal for US $1.4 billion and a US  $4 billion rail project. It is also involved in the power sector, mining, and a Chinese telecom infrastructure project with Huawei, including a digital free trade zone in San Miguelito. Panama’s shifting to Beijing had a domino effect, with 15 Latin American nations welcoming China’s BRI. However, the present Panamanian regime has managed to rebalance and scale back its Chinese infrastructure including the bridge, considering the Chinese ‘debt trap’ and the US geopolitical security concern.

The present Panamanian regime has managed to rebalance and scale back its Chinese infrastructure including the bridge, considering the Chinese ‘debt trap’ and the US geopolitical security concern

In a similar manner, in the backyard of the regional power India, Sri Lanka has invited the Chinese BRI with several projects that are of concern to India. Colombo has fallen into the premeditated scheme of a Chinese debt trap, paying off its loans in varied ways, from leasing its strategic assets through debt-equity swaps to creating extra-jurisdictional Special Economic Zones. Like in Panama, the Sri Lankan government would need to backtrack its China ‘bandwagoning’ foreign policy and bring a ‘balance’, and develop a considered perspective on the geopolitical and regional security concerns its close relationship with China brings. The interwoven regional geographical alignments, such as India-Sri Lanka and the US with its immediate periphery in Panama, cannot be outweighed by the strategic interest drawn by an extra-regional power, China. The same ‘Monroe Doctrine’ is applicable in China’s periphery.

Speaker of the Sri Lankan house, Mahinda Yapa Abeywardena, inked the Colombo Port City Economic Commission Bill on May 27 after it received approval from two-thirds of the government. Sri Lanka’s Supreme Court observed several clauses of the bill to be unconstitutional. The praetorian regime, with its majoritarian power, passed the Port City Bill in a hurry, ignoring and threatening the nation’s sovereignty. Justifying the passing of the bill during the pandemic and lockdown, the Speaker of the house explained, “there were precedents that Parliament sittings have been conducted without any hindrance even during World War II and also when the Sri Lankan Parliament came under a bomb attack”. The environment was conducive towards suppressing the democratic mechanism of public protest, discussion, and bulldozing the bill through. There are ample mechanisms in the Sri Lankan government’s political toolkit to turn down the bill. It was simply not used against China. In other cases, such as India’s East Container Terminal project or for the US MCC grant, there were public protests and experts committees of inquiry. China’s strength in handling the local agency, perhaps, with an ‘agency side payment’ to manoeuvre projects is clear through this.

Revisiting the work of Robert Putnam, Diplomacy and domestic politics: the logic of two-level games, considering how diplomacy and domestic politics are entangled in Sri Lanka, the present Gotabaya regime has crushed the domestic decision-making and negotiation space. The government mechanism of bargaining for a better deal at different bureaucratic levels with a foreign party is absent. When the decisions are made and concluded at the higher level first (Gotabaya with Xi), there is no space for bargaining. The acceptance of Chinese proposals without any negotiations will have serious consequences. Tagging along with China’s BRI and bandwagoning with the Middle Kingdom without any negotiation minimise the fallback option with other players, especially Sri Lanka’s closest neighbour, India. Gulbin Sultana warns ‘given the dynamics of India-China relations, Sri Lanka should not expect that India will shut its eyes and keep mum over the developments in the Colombo Port City, which is just 290 kilometres away from its mainland, even though unlike the US, it has not raised any official concern’. The domestic decision to favour China and lose its foreign policy balance will significantly impact India-Sri Lanka relations.

The recent China tilt strengthened President Gotabaya’s win—set at the domestic political level within the SLPP coalition securing his Presidency. This same coalition, which had successfully created a fear amongst the public over the US project MCC by depicting it as a threat to sovereignty, has used China’s port city to secure a domestic political victory upon passing the bill. What the present regime failed to understand was the domestic political victory upon passing the bill has failed to address the foreign policy fallout, which is fundamental for Sri Lanka to sustain a balanced foreign policy. The belligerence of China and the defence of China in an unusual manner, such as by Sri Lankan Foreign Secretary speaking on Xinjiang, has invited multiple levels of external pressure on Colombo’s foreign policy. An assessment of the recent developments in the country reveals a subversion of democracy and a weaponisation of the neutral agencies that would otherwise ensure checks and balances in an effective democracic set up. The elected office bearers maintain a veneer of democracy and rhetorically accept the foreign policy balance while eviscerating its substance by endorsing an alternative Chinese model.

In China’s  CCP (Chinse Communist Party) model, President Xi has nothing to worry about over Sri Lanka’s port city project. The Sri Lankan government’s acceptance and passing of the bill is another victory for President Xi’s BRI strategy. It is a victory more for his foreign policy than for the domestic. Gotabaya has a different measure where the passing of the bill has become more of a domestic political concern due to the democratic nature of governance in Sri Lanka. If the bill fails to deliver, it could even cost him his presidential seat while President Xi has no such concerns. The majoritarian win-set created and used to play the China card can switch its position, making the democratically-elected leader vulnerable.

There are two reasons the government hurried the Port City bill in just under a month. First, Sri Lanka’s economic situation has worsened with the pandemic. The country’s foreign inflows had been impacted and debt management has become a serious concern, with accumulated ‘total outstanding external debt at US$ 35.3 billion by end of August 2020’. PB Jayasundara, Secretary to the President, justified the port city by pointing out that “this is why the Port City law matters… Port City legislation enables Sri Lanka to create a service centre with an incentive structure that will encourage the FDIs on a much stronger footing”. He further explained the government’s position on foreign loans, asking “to refrain from getting foreign loan-funded projects in the future”. While the government’s fiscal position has deteriorated, China’s port city is seen as a promise to restart the ailing economy.

Second, the political security guaranteed at the human rights council by China to the regime was proven by China’s support to vote against the UNHRC resolution to look into human rights violations during Sri Lanka’s long civil war that ended in 2009. The phone call after the UNHRC vote was well-timed by the Chinese leadership. For the Rajapaksas, this political security is an essential ingredient for survival. China openly backs this cause, reaffirmed by a high level official visit of Chinese State Councillor and Minister of National Defence, Wei Fenghe, who said, “Chinese side appreciates Sri Lanka’s position on issues relating to China’s Taiwan, Hong Kong Special Administrative Region and Xinjiang Uygur Autonomous Region, and will as always support Sri Lanka’s stance on issues relating to human rights”.

While China would defend the Sri Lankan government’s human rights posture and accept whatever form it presents, Western democracies will be obliged to highlight the long-delayed minority concerns in the island. The recent resolution from the US House Foreign Affairs Committee (HFAC) on Sri Lanka is a clear indication of pressure on the Sri Lankan government to achieve some credible transparent domestic process

While China would defend the Sri Lankan government’s human rights posture and accept whatever form it presents, Western democracies will be obliged to highlight the long-delayed minority concerns in the island. The recent resolution from the US House Foreign Affairs Committee (HFAC) on Sri Lanka is a clear indication of pressure on the Sri Lankan government to achieve some credible transparent domestic process. The Sri Lankan Ambassador in Washington has denied what the resolution has concluded and stated: ‘Calling an international mechanism at this juncture was sinister, at a time the present government had provided such mechanism’. This ‘state of denial’ is a common trend in sync with with the UNHRC resolution denial; the  absence of a credible mechanism is evident in tSri Lankan society. The new European Union Parliament adopting a resolution to withdraw the Generalised Scheme of Preferences (GSP+) is a clear warning to the Sri Lankan regime. The resolution highlights Sri Lanka’s “alarming path towards the recurrence of grave human rights violations”.

Being sheltered by only China’s financial muscle and security are clear miscalculations. For China, pushing this port city deal is high on the agenda, especially at a time when there is significant global pressure over China’s belligerent behaviour in its neighbourhood and elsewhre. Bringing Colombo into its sphere is a considerable victory in its larger BRI trail. Further, the agreed period of the port city bill exceeds the time span of the present government. Could a future government re-open the bill or default on the deal? A similar revisit was discussed by the former government after signing Hambantota Port deal. If a revisit is possible and the port city deal is feasible, then Sri Lanka would be grateful for such transformative infrastructure. But President Gotabaya’s election promise to revisit the Hambantota Port deal that has been signed for 99 years never occurred. History tells us that there won’t be much difference in Chinese flexibility in revisiting the port city bill.

The fast-track approval for the port city bill shows the strength of the Chinese sphere of influence dominating and dictating local agency. Sri Lankan foreign policy today is in the shape of a doughnut, focused on the external interests of China. Worryingly, it is hollow at the center, with national interests safeguarding sovereignty lying completely neglected. This foreign policy will begin to shake once an external partner intervenes in domestic affairs and the Sri Lankan regime loses its domestic political grip.

(Abeyagoonasekera is an international security and geopolitics analyst and strategic advisor from Sri Lanka. He has led two government think tanks providing strategic advocacy. With almost two decades of experience in the government sector in advisory positions to working at foreign policy and defence think tanks, he was the Founding Director General of the National Security Think Tank under the Ministry of Defence until January 2020. Earlier, he served as Executive Director at Kadirgamar Institute.) 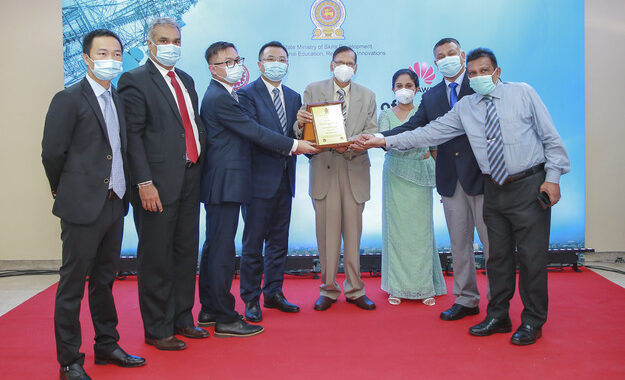